First I would like to brag how I made it to the airport from my house in 11 minutes, through TSA in 12 and to the gate in 6 for a total from house to plane in under 30 minutes! I guess this is one perk to early flights. Early wake up not so much…. Yes it was only 5:55 alarm and it was rough. I blame the boyfriend! Back in my single lady living in the city days I used to wake up at 5am, run, and be at work at 7am…. What happened to me… I guess chasing the cat around the house until midnight doesn’t help 😉 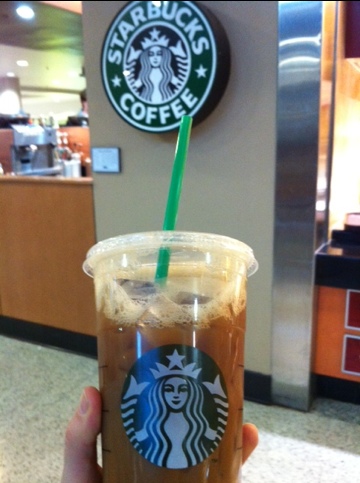 I’m going to share a possibly unethical secret. Recently I noticed that Starbucks starting charging like 69 cents for soy milk New England and NYC ( for real how dare they). I think the surcharge is waved if you have one of those Starbucks frequency or membership cards. You could do that but I’m one of those mess in a purse people so the last thing I need is another card to carry and lose. However, if you ask for soy milk after they hand you the coffee they rarely charge you after you already paid. Personally I think it should be out with the regular dairy milk. I think it’s fair enough when I’m already paying 3 bucks for my ice coffee 🙂

I stopped the treadmill at 7 miles but decided that since this is my last run before The Marathon I should probably cool down.

I did a final foam roll

And finalized my decision that I’m going to race this Saturday, not just train tempo but race. Work has been getting busy and won’t improve much until the tax deadline. I’m at the peak of my training and taking a week off from training won’t ruin my ability to run Boston. I won’t have much time for more than an hour run except for weekends in the next few weeks. Since I’m at the peak of my training, I might as well make the best of it.

My ultimate goal is of course for a BQ (quite lofty for a first marathon) but my official goal is to finish. During my training runs I got down to an 8:10 pace on flat surface. I know I have the ability now to get it down to 8 minute mile. I went from 9 minute pace on long runs to 8:10 on my best run to date (I was a bit sore for a few days). However I know that most likely DC won’t be a BQ for a few reasons.

1. It’s going to be 75 degrees and all my long runs have been in 45 degree weather. My water needs will obviously be much greater as I’m used to running with no water break until mile 18 or so.
2. I’m traveling and my schedule is disrupted.
3. I am not tapering… Completely and I plan on being a tourist and waking around the day before the race
4. The course is hilly for the first 13 miles and the turns seem a bit confusing when I looked at the course map

Sometimes just knowing that something is in my future is enough so instead I’ve come up with a few more reasonable goals.

1. First goal is to have fun
2. Stay hydrated and wear sunblock ( I guess this is more of a reminder)
3. Try to give each band on the course at least a small listen ( I’ll have my music/podcasts on me; but it is a Rock and Roll marathon after all)
4. Finish under 4 hours ( I need a time goal)
5. Visit the panda at the zoo (okay not a marathon goal but a DC goal)