Hi! I know it’s been a while. I’ve been traveling a bit, and at home I’ve been having some spotty wifi. Thanks Verizon Fios! Glad I’m paying you all $$$ to get limited wifi. Anyways end rant

It’s been two marathons and two weeks since my last update. I know I’m still behind on many race recaps, but I’ll follow a LIFO (last in, first out) approach to races because I rather have one fresh great recap and two slightly hazy memories than three hazy race recaps.

I’ve had Vermont City marathon on my calender since Christmas because it was one of my gifts. I was planning on making it a peak race and a PR race, but then I got into a dangerous world of weekly marathons. And while I still believe high mileage is the key to PRs (for me), high racing events takes a wear mentally and physically on me. What also didn’t help was that after my 50K, I was having some runner knee issues and pretty much took two weeks off running. Problem with the two week break is that I went straight into a marathon, a hilly one in Olympia, just to take a few days off again before going into Vermont. Needless to say, don’t do that if you’re looking for a PR.

So in three weeks, I covered about 80 miles, with three of them being marathons, two of them being very ugly time wise for me. I’ll get more into the race later.

So the first thing that makes Vermont City marathon so awesome is how late their expo is open. On the day before the race, I had until 7:00PM to grab my bib and they also offered race day pick up. Since, I no longer make a full weekend out of races, and sometimes traffic is a complete bummer, the later expo time was a huge plus to me. I went into the expo Saturday around 5:50PM and saw the usual expo stands, some food samples and the usual running expo fun. I didn’t linger too long, because Tony and I had an evening boat ride, but I was able to grab all our numbers and shirts and quickly scan over the booths within 5 minutes.

The swag back consisted of a chap stick, chocolate, soap (but only in one bag?), natural apple sauce, a cap, and our shirts. When I went to grab Tony’s shirt, they did run out of men’s mediums, but since he wasn’t running due to injury, I just grabbed a second women’s small for myself. 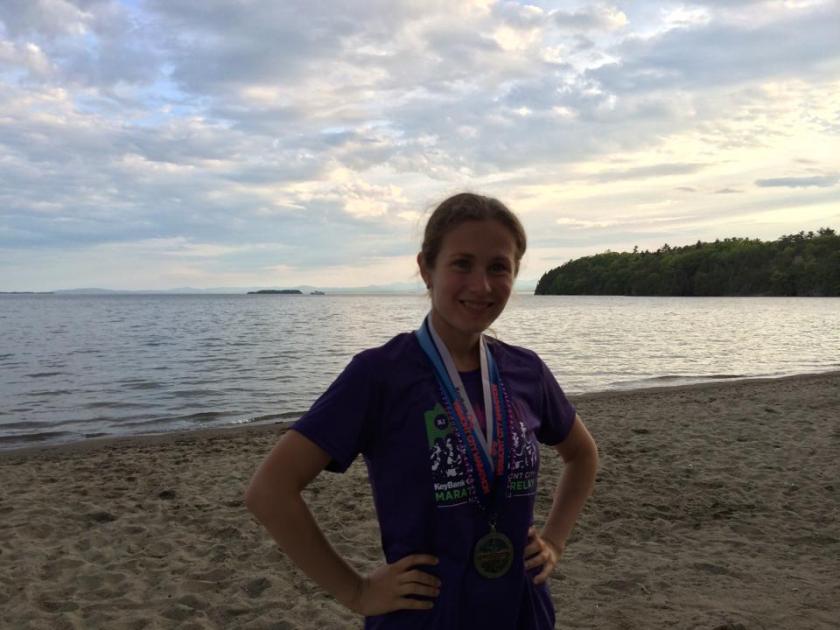 I usually donate my race shirts, but between the memories and how soft it is, I’m keeping two of them!

So we had our first AirBnB fail. We had a lovely studio on church street that got canceled a week before. My theory was the dude was airbnbing his place and when the landlord found out, he got kicked out. Being memorial day weekend, with a huge marathon, our lodging options were pretty depressing. We decided to camp at North Beach campground since our alternative of paying $250 a night for the Days Inn was not going to cut it. North beach is what they call an “Urban campground” basically you’re on top of each other in a dirt parking lot. Whatever, the weather was nice and we have a great looking tent. 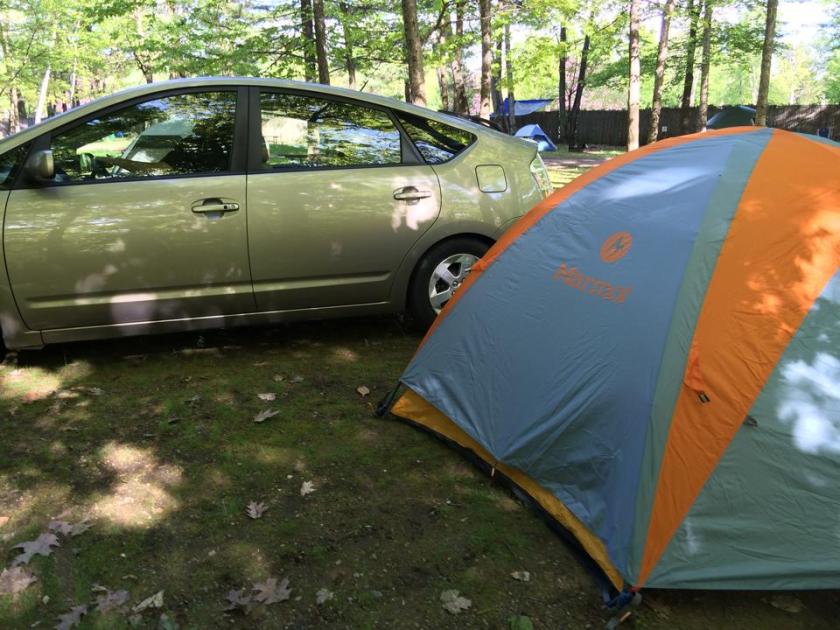 I actually slept better than usual with the exception of an annoying group of women in tent next to us slamming car doors at midnight! Come on! They continued to annoy me with an early wake up call of door slamming as well. If I was a monkey, I would have thrown my feces at them. Instead, I grumbled and tried to assemble myself together.

The good part  of camping vs. hotel room, is that once you’re awake, it’s not really that comfortable lingering in a tent, so you get dressed and get going. I usually eat toast and peanut butter but since we had dinner at 9PM, I still felt insanely full so I just opted for peanut butter in one of those single serving JIFF things in the 3 minutes it took us to drive from the camp site to the race start. 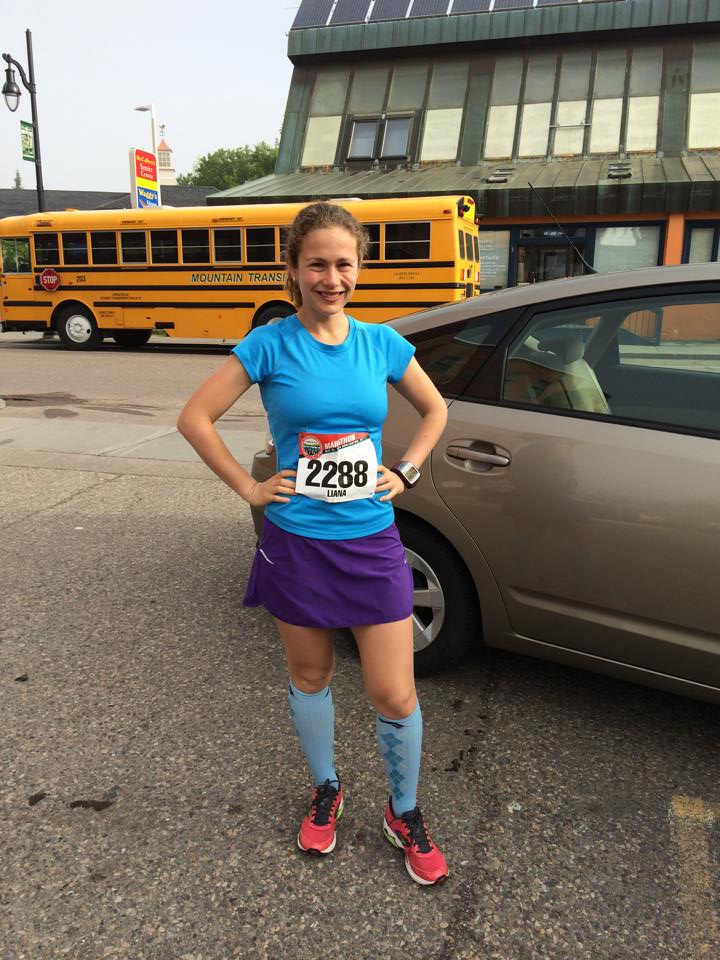 I lost track of what number marathon this is, but every race day always feels like my first =)

When I first studied the course map, I found it a bit confusing and intimidating. I think since more than 5,000 of the 8,000 runners were participating in a 2-3 person relay, the design was so for the most part everyone can start and finish in the same area. 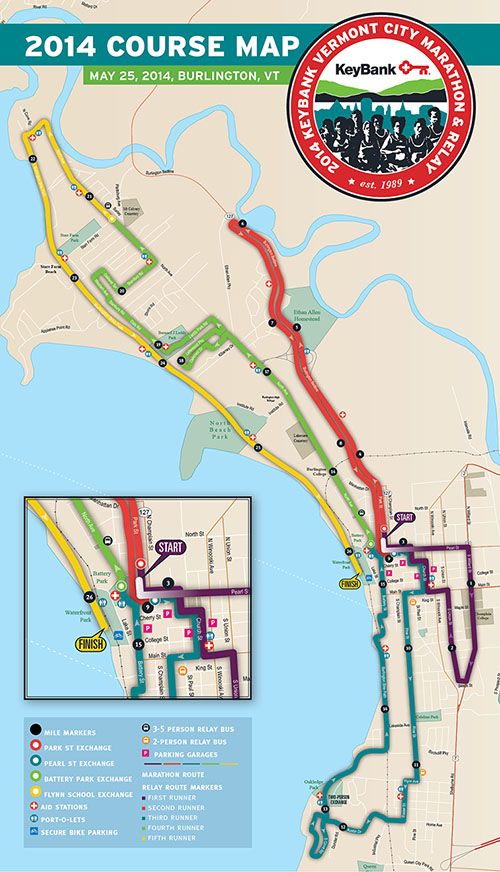 I ran as a relay of one, but it seem like a great way to make team work a dream work. 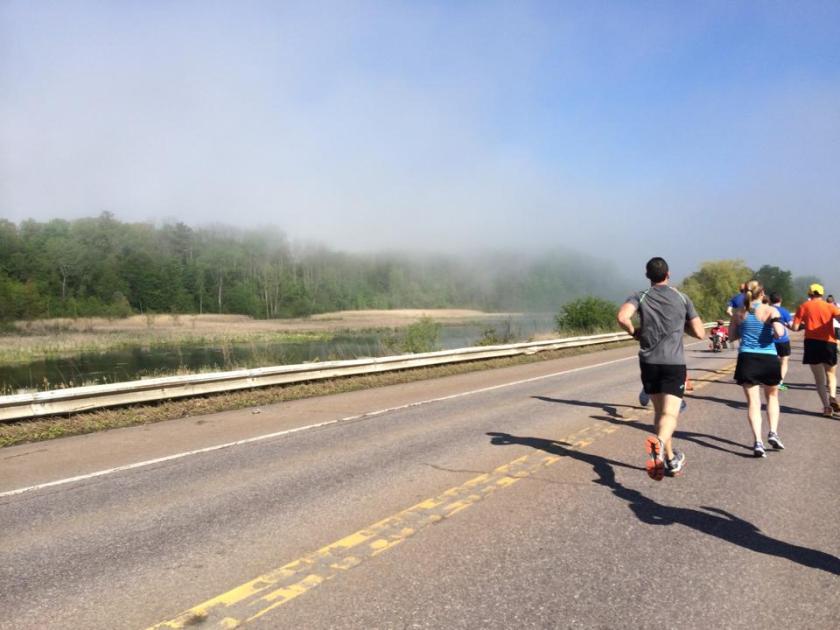 The gun went off and I knew right away this wasn’t going to turn into a fast one. My legs felt dead and sun was already breaking through the humidity and fog. I think it was around 60 degrees. However, I loved watching the fog, and it was going to be a beautiful day. 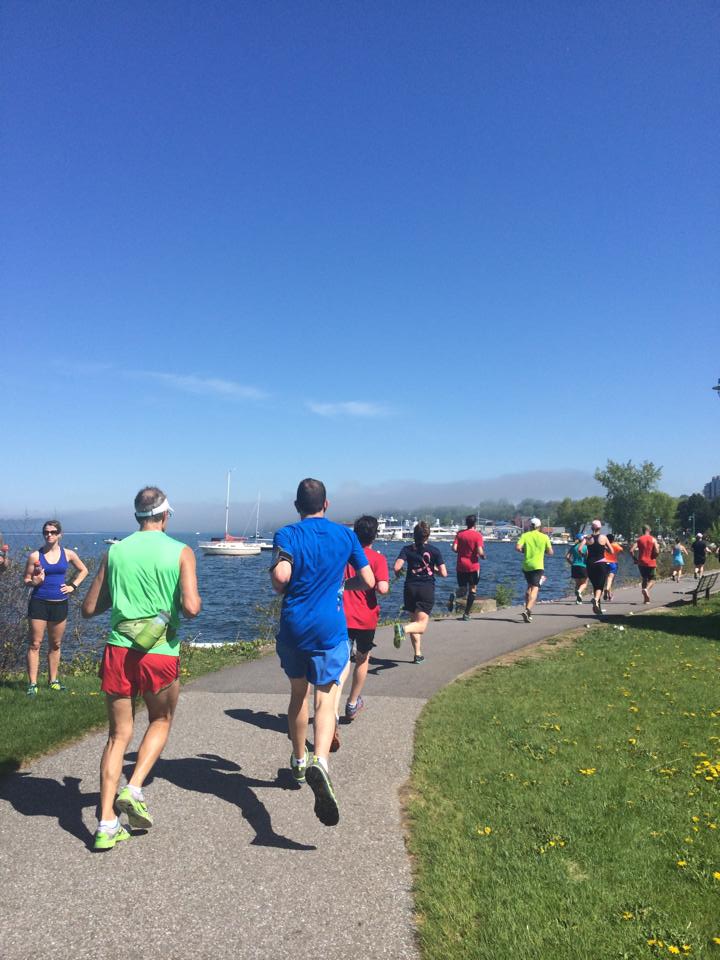 I reached the halfway point around 1:55. At this point my strategy was to hang easy and steady. Slow running was better than slow walking.

I held about 8:12 average pace for the first 10 miles and then went through some major struggles as my body wasn’t used to running distance any more. I slowed to an average pace of about 10 minute miles for the rest of the race.

Somewhere between mile 8 and 26.2 we started going on and off this beautiful bikepath. While normally I would get cranky since I find them narrow and crowded,  this beautiful view of lake Champlain was only really accessible with the bike path so I loved it. 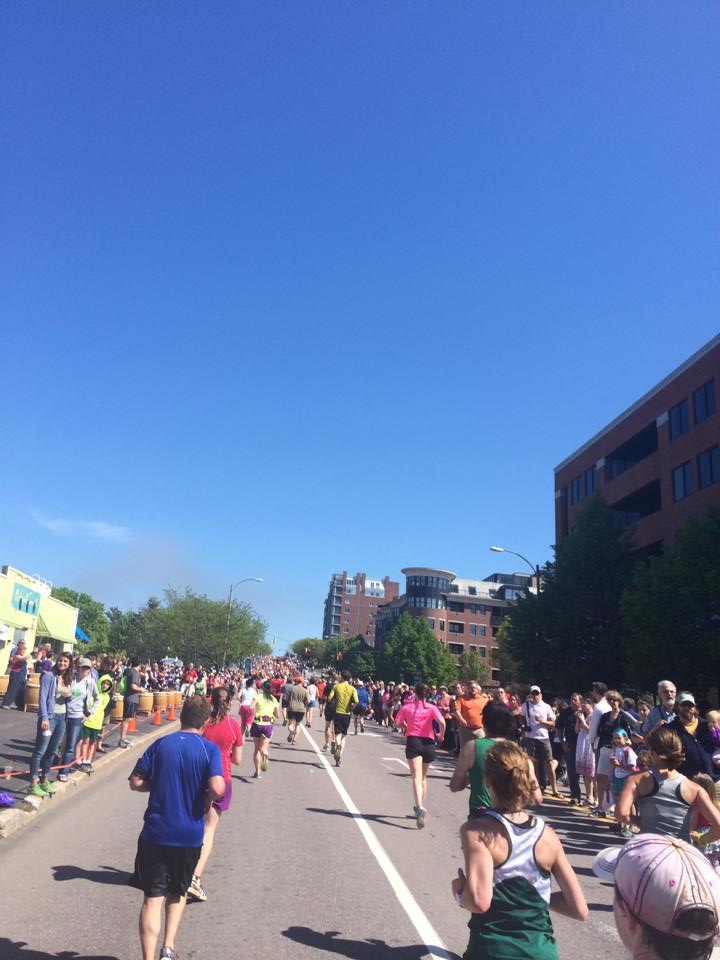 While the course has mild inclines and declines, there is technically one “hill” that goes on for about a mile. The photo doesn’t do exact justice, but it’s definitely a killer after mile 15. What’s cool is that they line it with Taiko drums! 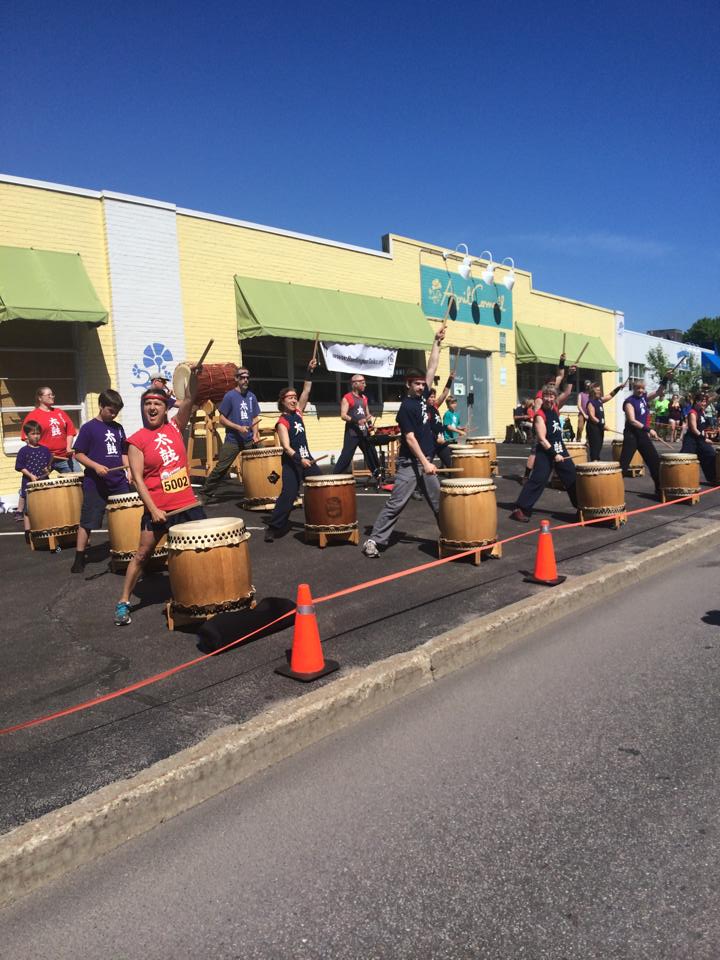 Totally loving how some of the drummers are rocking their bibs because they just ran part of the relay!

So I would like to say I ran the whole hill like everyone around me, but I didn’t! Instead, I took my time, and when I got to the end of it, I was rewarded with a downhill that I got to run on instead!!! One day I want to eat hills for breakfast, but not today.

If I look at the elevation, it looks like there’s two hills, but I really don’t remember the one around mile 7-9. 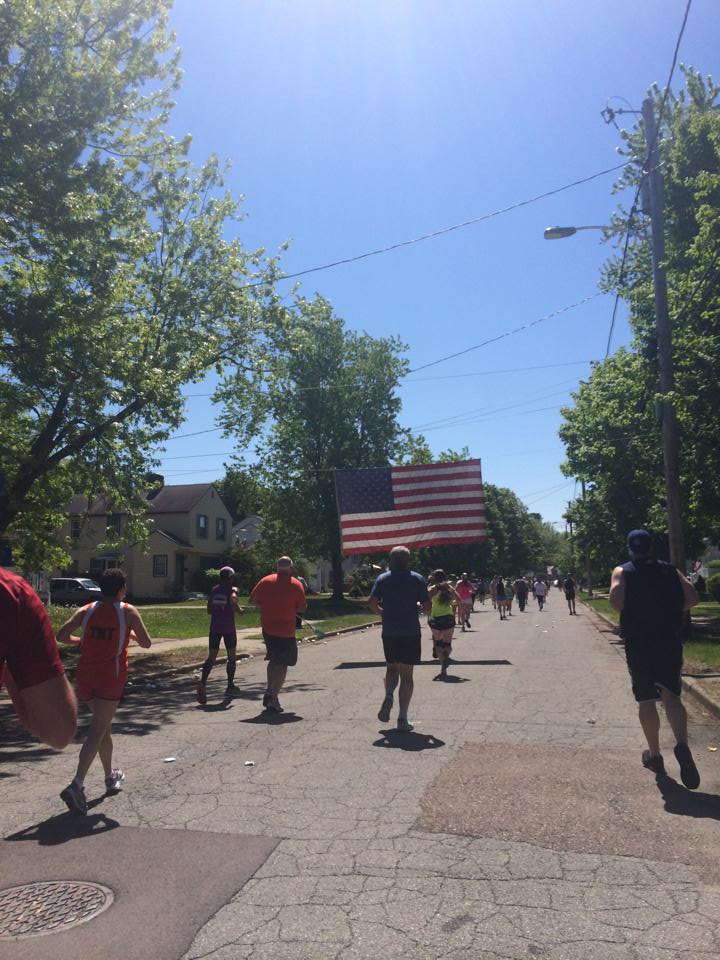 Somewhere around mile 18 or 19 we ran through this little residential neighborhood where the roads sucked but everyone was all out and about with little kids cheering and make shift aid tables of fig newtons and watermelon and beads. I by passed the food but accepted some beads from a little girl and glammed myself up a bit for the final 7 miles.

If,  I had to guess, I would say I was feeling my best in the final 10K. Yes it was hot, yes I was barely breaking under 10 minute pace, but at this point nothing was bothering me. I had the finish line in sight and I found a nice dirt path on the side of the bike path that seemed to be agreeing with my legs a little more and I had this in my mouth 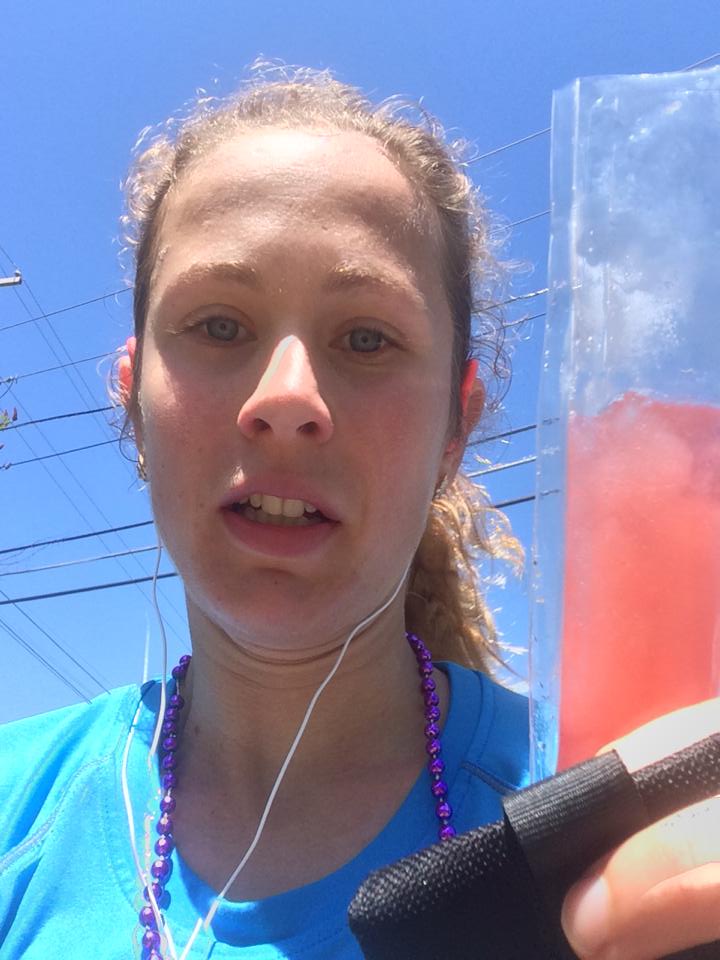 Or maybe I was so heat stroke, that I was in a new state of unawareness. Either way, I’d like to think I finished with a kick!

I guess if I had one complaint, it would be the finish area. I know they’re limited to the park, but I found it hard to navigate to the family meeting area due to the barricades they set up for crowd control. Maybe it was worse without them, but I got trapped in between crowds and couldn’t exit for a little while. I didn’t see much food, but it was hard to get around so maybe I just missed it. I grabbed a banana, a water and gave up trying to find the family meeting area and instead found a parking lot to meet up at instead.

What makes this race such a blast are all the participants from the runners, to the spectators to the volunteers. I think well more than half the runners around me where in the relay. This kept the course energetic and exciting, but also crowded. Despite that, I was felt pushed, spitted on, or any of the other annoyance I find sometimes when different distances are mixed in. The volunteers were all excited to be there. Sometimes when talking to random folks outside the race around Burlington, everyone loved to share their day whether they ran, screamed, volunteered and anything in between.

It was truly an event that everyone was participating in. It wasn’t Boston, but the excitement I felt around me, it might as well been. 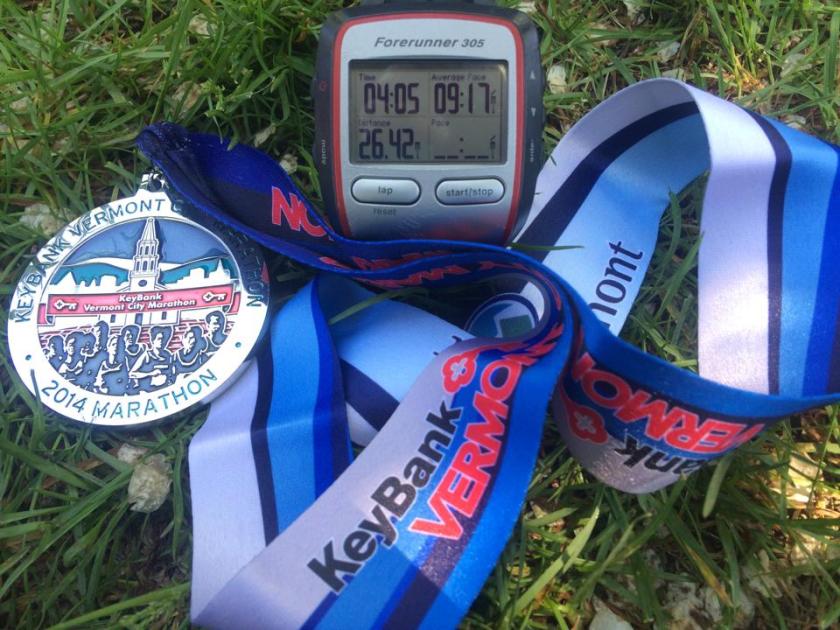 I can’t say I feel truly happy with my time, but I don’t have anything to complain of either. It was such a beautiful day and I was doing one of favorite things in the world, running.

Plus how neat is this little infographic 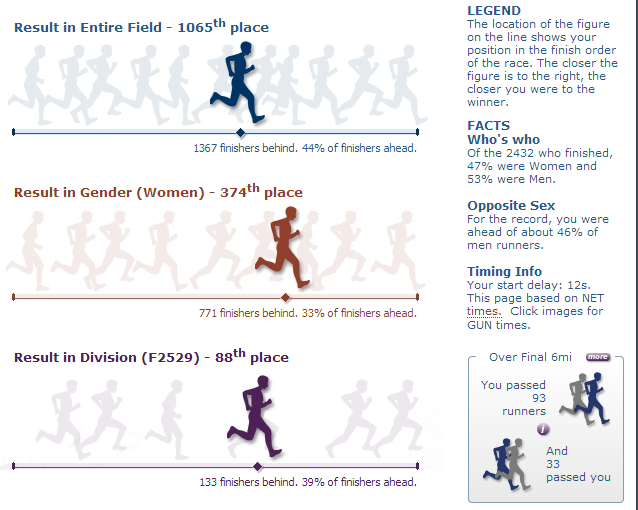